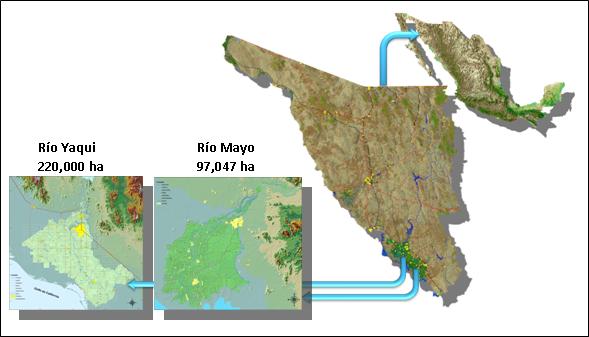 The main water challenge in the pilot zones is to irrigate the most of surface in a sustainable way.

To assess that the surface under irrigation fulfill the restrictions in drought periods.

The larger conveyance network of water supply, dams and main canals are operated by technical personnel of the National Water Commission and they deliver the irrigation water to 42 irrigation modules in which the District is divided. Users of each module are arranged to form Civil Partnerships Users Yaqui River, its technicians are responsible for distributing the volume of water to the users registered in the census; annually the total volume of water is delivered to each module in block and is measured in a strategic control point of the larger network. Within Modernization Programs District recently installed a communication wireless network that allows automation of wells that can operate efficiently.

Manage Cookie Consent
To provide the best experiences, we use technologies like cookies to store and/or access device information. Consenting to these technologies will allow us to process data such as browsing behavior or unique IDs on this site. Not consenting or withdrawing consent, may adversely affect certain features and functions.
Manage options Manage third parties Manage vendors Read more about these purposes
View preferences
{title} {title} {title}